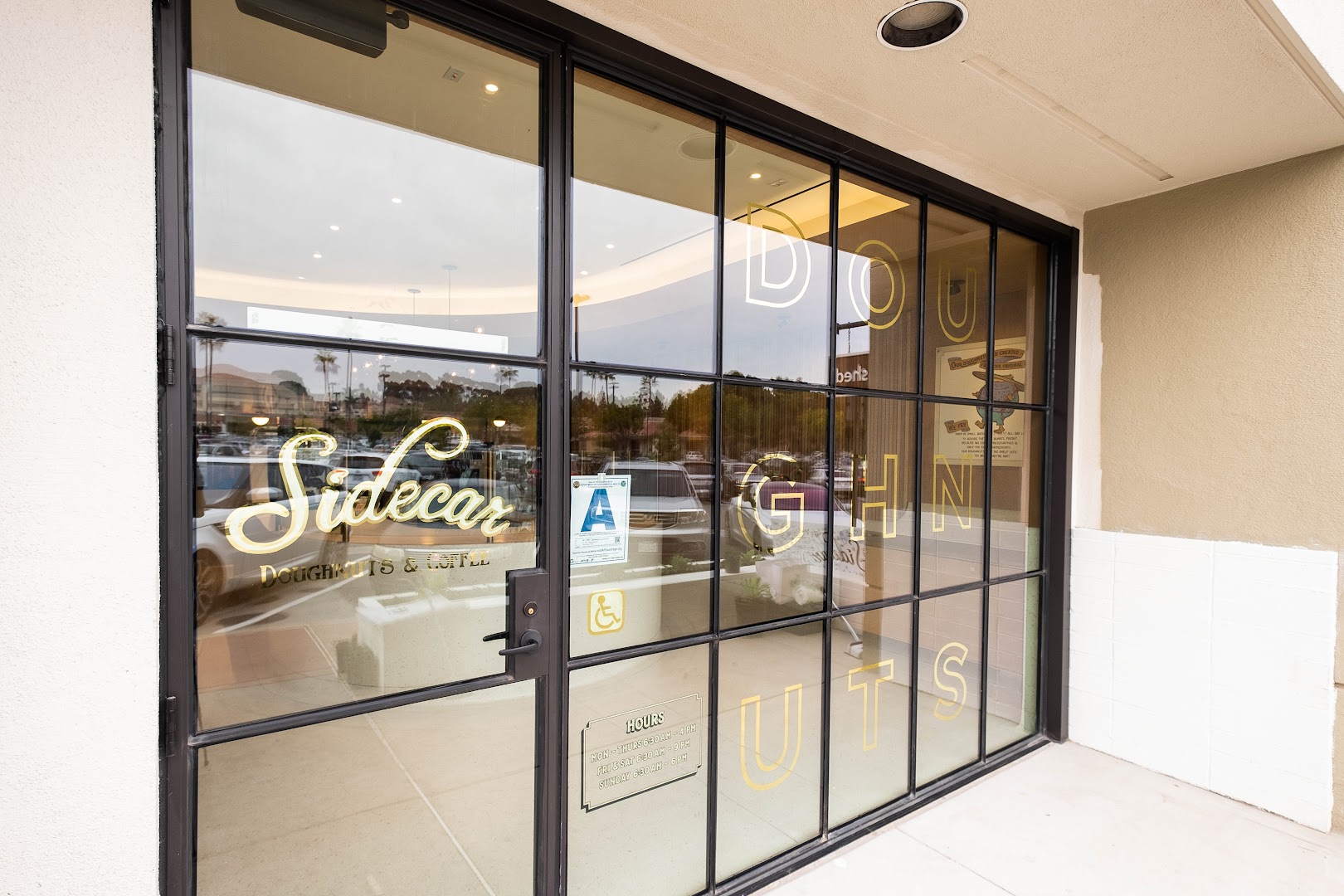 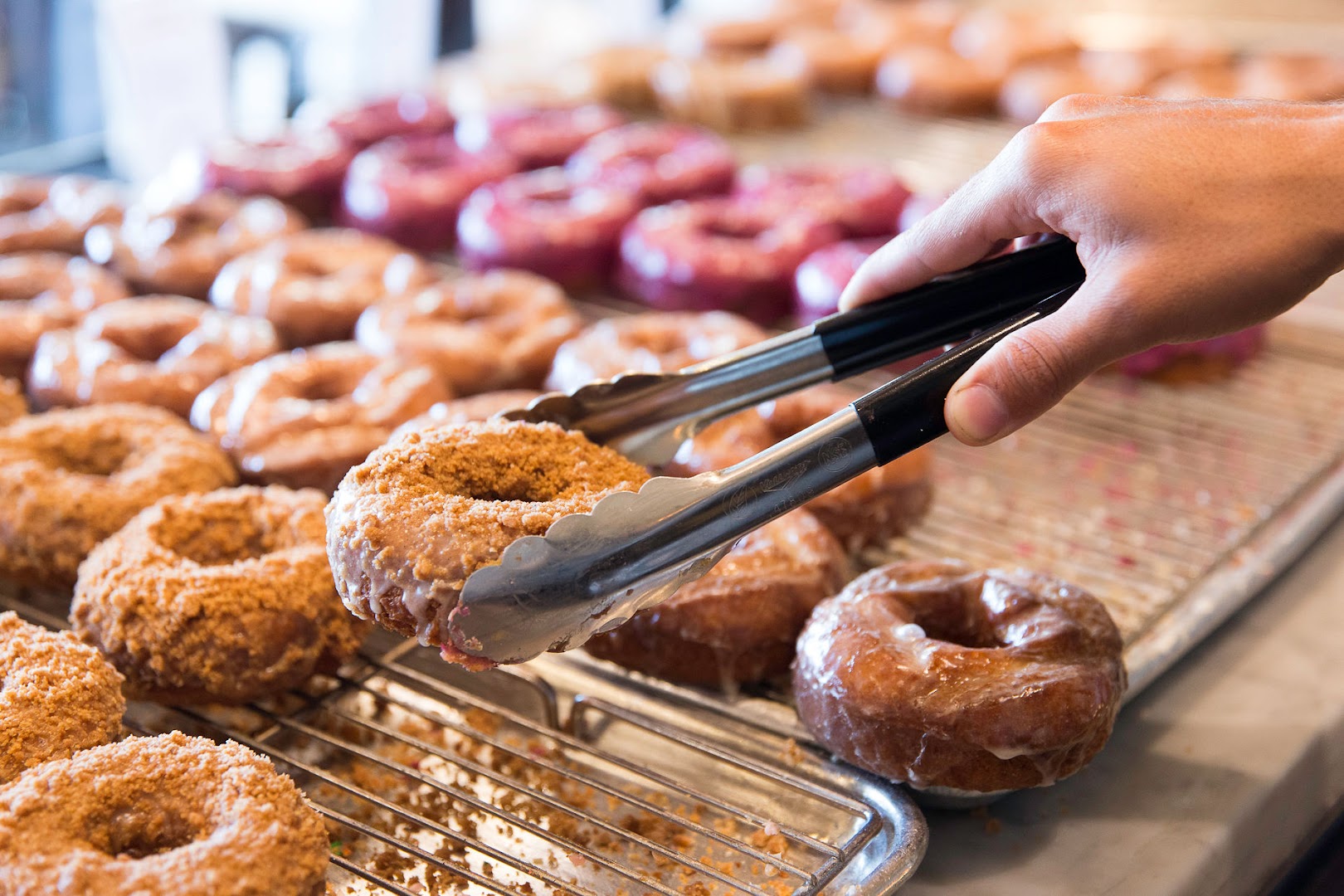 if you’re in the mood for delectable donuts in the Del Mar área, look no further than Sidecar Donuts. Their flavors are top notch and are extremely unique. The prices are reasonable (definitely makes sense considering the size and flavors at hand) and the staff is extremely friendly. Would highly recommend the maple bacon donut.

Sidecar has the freshest donuts with really unique flavors like Huckleberry and Saigon cinnamon. I prefer a cake donut and they have a lot to choose from. This place is not in my neighborhood but worth the special trip.

Donut Series, Part 2
Sidecar Donuts was referred to us by @donuthunting (“The Godfather of Donuts”) and for good reason. Somehow they have managed to elevate their creations to a level that transcends the typical donut experience. You can just forget about sifting through stale offerings here since they produce new batches every hour.

Ordering was a bit of an ordeal, but that had nothing to do with the attentiveness of the staff (who were great). Our ordering issues were the direct result of our indecisiveness and FOMO was clearly a complicating factor. It is important to note that 4 of their donuts are made only once per week, so plan your order accordingly (Malasada—Mondays; Twist Tuesday—Tuesdays; Cinnamon Roll—Wednesdays; Apple Fritter—Fridays). When you do place your order they are placed in what reminded us of a corsage box.

The consumption of our donuts seemed completely uncomplicated. That experience seemed primal in nature with the lines of whom ordered what becoming blurry and individual territories needing to be established and reestablished repeatedly. Thankfully all relationships remained in tact and no significant injuries occurred.

We sampled the “Maple Bacon”, “Malasada”, and “Choc-A-Lot” and although they were each unique unto themselves, they did all have some common threads. Their flavors were each decadent and none of them were burdened by that heavy “something’s stuck in my gut” post eating experience. One of our Review Team Members actually viewed them as more accurately falling within the cup cake family than the donut one.

While the reason to visit is totally about the donuts, it’s worth noting that the coffee was also good.

Vegan and gluten friendly options are available and if you download their app you’ll be rewarded with a free donut. These guys had a lot of hype to live up to, and boy did they do it!

Walking thru the Del Mar shopping area I smelled a wonderful scent coming from where Sidecar resides. Those fresh donuts really put out some great smells.

I was overwhelmed with choices. Ended up with the Maple Bacon, Dolce De Leche Churro and Saigon Cinnamon Crumb and 8 ounce hand poured milk.

Crushed that Maple Bacon pronto!! Wow.. just wow. Brought me back to my days of living in Canada . We love maple and bacon up there!

Up next was that Dolce De Leche Churro, couldn’t let that baby cool off. This donut was a Lil bit of heavenly sugary goodness. Also amazing.

Had to save the Cinnamon for a few hours later. And just like the first two, it was an incredible donut .

Go get these warm and have with your favorite coffee or milk or preferred drink and enjoy these big, yummy donuts!

Wow! The young man who welcomed us at the door understands great customer service! (He didnt have a name tag but had a hat, mustache, and was working at 7am) Donuts were massive and tasty and the coffee was rich and flavorful ☕ Will come back next time in the area!

I was debating between 4 and 5 stars for this place but settled on 5 because the donuts are too good to resist. I’m a fan of the yeast donuts, and do they do their yeast donuts well. Had a craving for donuts one rainy day and made the trek to Sidecar because it’s been on so many people’s recommendations.

I would have rated 4/5 stars mainly for the price. Those two donuts in the picture? $10. That could have been an entire meal at Chipotle (though I guess the calories on these donuts could be a meal – don’t tell me).

But are they worth it, you ask? An addicted yes…. they are worth it. But would I in the future drive past neighborhood donut shops for this place again if a donut craving were to strike again? Maybe not, unless visitors are in town. 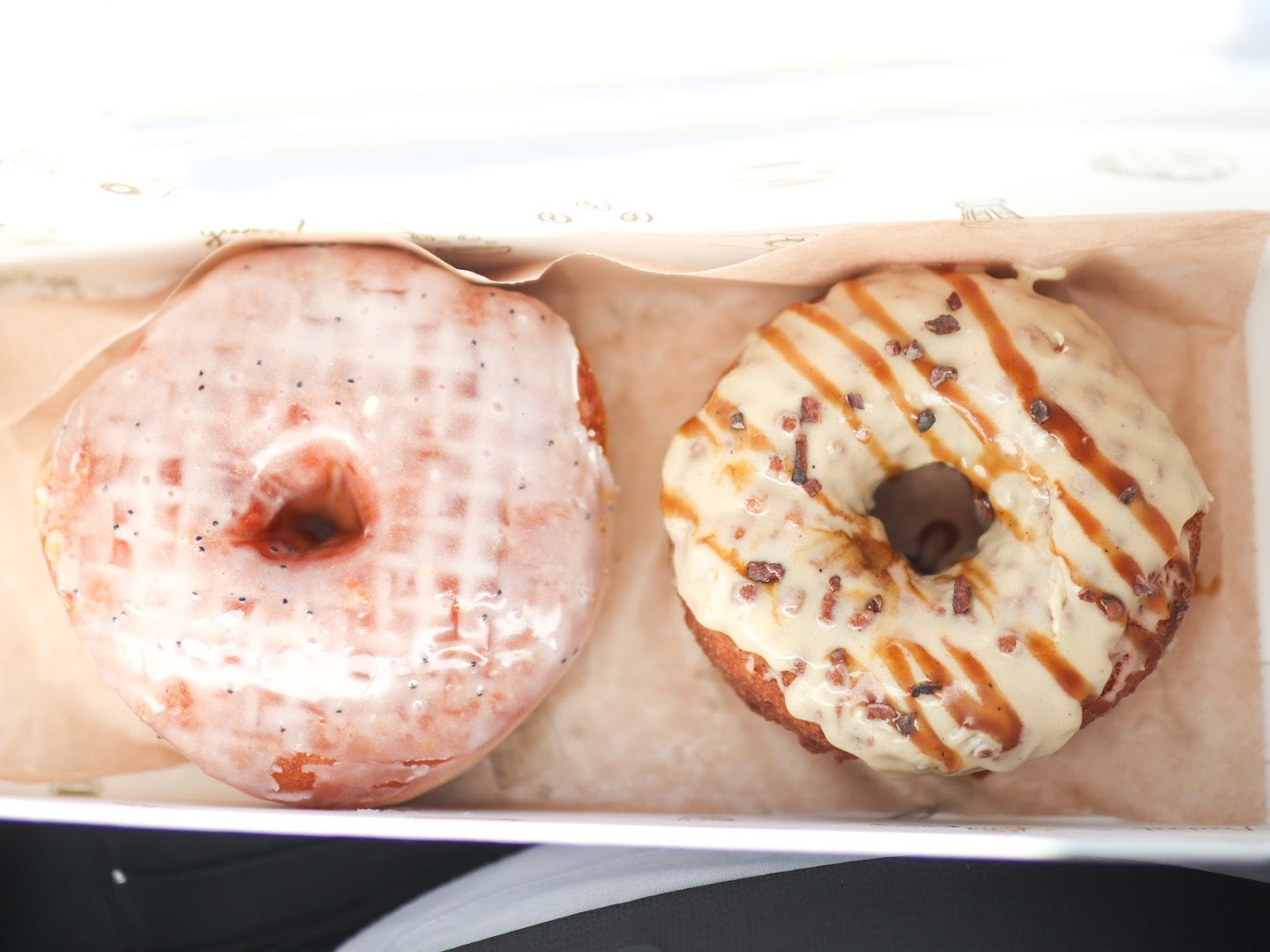 YUM! Not even a donut lover but I loved these donuts! So many fun flavors to try as well as classics! We got the lemon poppyseed and brown sugar ones and both were super tasty!

Loved my donuts and everyone was so nice. The shop was adorable and I would for sure go again. I ordered the Passion fruit Pavlova and it was delicious. We also bought the Dulce de Leche churro which was also very tasty. Wow. Some of the best doughnuts I’ve ever had. I tried the Eggs Benedict donut and it was amazing! Must eat with knife and fork. I also had the glazed yeast doughnut, the jelly filled, and the butter and salt cake donut. I think the glazed was my favorite but they were all good.

Was passing by the area and heard these were good. The place is small and clean. There are various artisan donuts here. Very tasty and worth the price you say (they are more expensive than your average donut shop – average $5 a donut). Staff was meh – not extremely helpful, and it wasn’t even very busy. Would come again when I’m in the area.