Skip to content
The Donut Whole » How to Make Vegan Donut?

I have a sweet tooth, so I enjoy anything sugary, especially donuts.

They’re my guilty pleasure. Whether fried or baked, filled or glazed, it doesn’t matter because donuts taste amazing either way.

However, I started making my favorite donuts much healthier since I became vegan. I figured I don’t need a deep fat fryer for preparing doughnut recipes, as they’re also delicious and much healthier when baked.

In today’s article, I will share my favorite vegan donut recipe and tips on substituting animal-based ingredients with plant-based ones.

The best part about this recipe is that it’s easy to make and well worth the effort, so let’s dive right in and make ourselves a mouth-watering treat for the day. 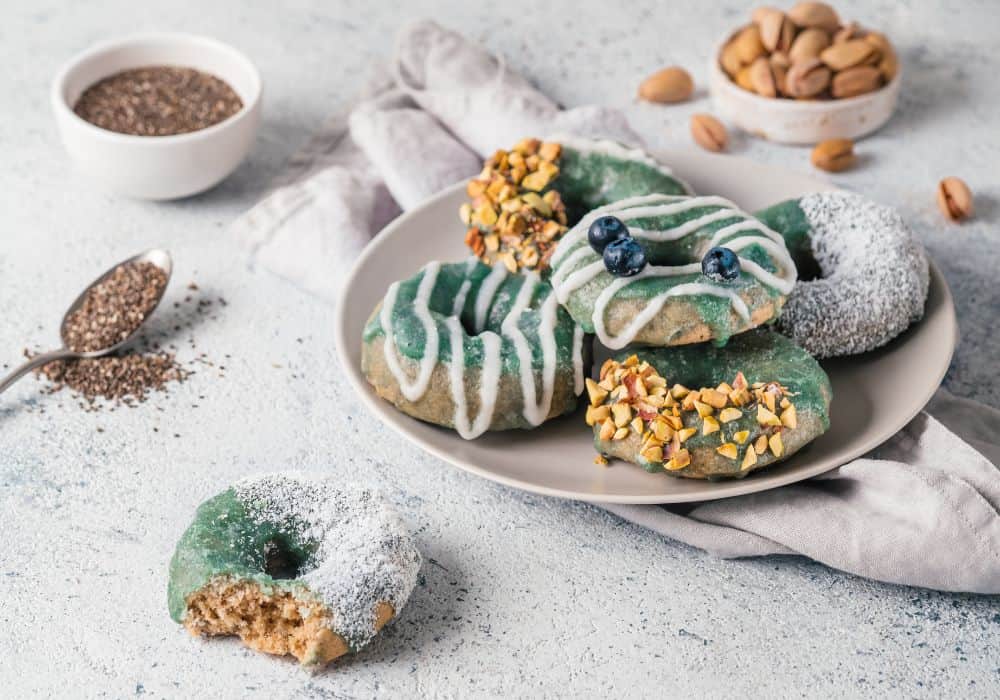 Look no further than mine if you’re looking for a vegan donut recipe for fresh, warm, and delicious donuts in 20 minutes. I’m not bragging, but it’s truly exceptional.

You can enjoy your healthy donuts with a cup of coffee or tea at any time of the day. The only special tool you will need for this easy recipe is a high-quality donut pan.

I suggest purchasing one, so you can make your baked donuts at home. If you can’t get your hands on a donut pan, don’t worry; your muffin pan will do the trick.

As you can notice, vegan donuts include common household ingredients, so there’s a great chance you already have everything for this recipe in your pantry.

The only ingredients that aren’t common include food coloring and sprinkles.

However, remember that these two ingredients aren’t mandatory; hence, they won’t affect the outcome of your recipe; your donuts will taste just as delicious.

Now, let’s take a look at the cooking steps for this recipe.

Step by Step on How to Make Vegan Donut 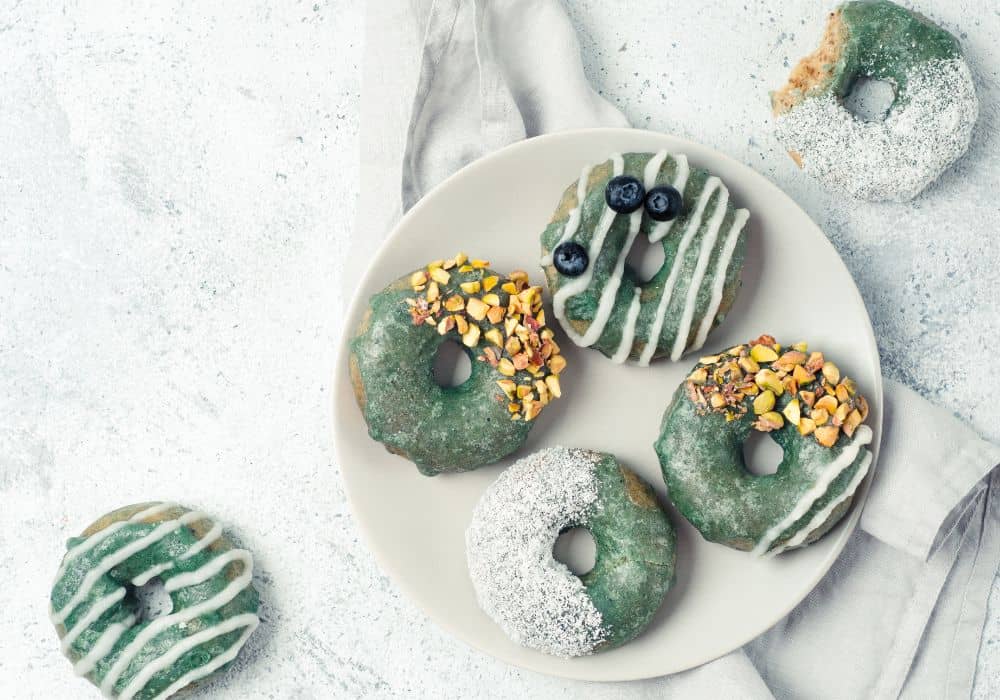 Once you gather all the ingredients above and decide whether you will have sugar-free vegan donuts or use regular sugar, it’s time for the actual recipe.

The recipe will take only 20 minutes of your time and produce six donuts. The best part? The formula consists of three straightforward steps, so it’s super easy.

Remember to leave your baked donuts to cool down for at least 30 minutes so the glaze can set. After 30 minutes, you can enjoy your donuts for breakfast, lunch, or dinner.

First, preheat your oven to 400°F (200°C) because the donut batter comes together quickly. Additionally, you can take out your donut or muffin tray and set it aside.

I suggest using a silicone donut tray, as they’re easier to use. Your donuts will slide out of the silicone tray with ease. They’re also easier to clean than standard trays.

Avoid non-stick trays as they’re not really non-stick. Quite the opposite, the donuts often get stuck to the tray. So, save yourself the trouble and obtain a silicone tray.

Anyway, let’s proceed with the preparation of the donut batter.

Mix the milk of your choice, melted coconut oil or vegan butter, and vanilla extract in a large bowl. Whisk until combined and move to the next ingredients.

Mix the flour, sugar or natural sweetener, baking powder, baking soda, and salt in a separate bow. Whisk until combined, and pour the mixture into the previous bowl.

Combine until you’ve made a donut batter.

Once done, set the batter aside and coat your tray with cooking spray. Finally, mold six donuts out of the sticky donut dough.

After filling your donut tray, place it in the oven and bake for 10 minutes. Watch out for the donuts while baking so you know when they’re done.

If you’re unsure they’re done, take a toothpick and stick it into one of the donuts. If it comes out clean, you have perfectly baked vegan donuts.

You can prepare the glaze right after you place your tray in the oven, so it’s ready for use once your donuts come out.

Don’t worry, as it’s a very simple process that takes only a minute of your time. Just mix all the ingredients for the glaze above (vanilla, milk of your choice, food coloring of your choice, and powdered sugar or natural sweetener) in a bowl.

Mix until combined. You’re supposed to get a slightly runny but thick enough mixture to cover your donuts nicely.

You can make it thicker by adding extra sugar if you think it’s too runny. However, If it’s too thick, you can add additional milk.

Extra tip: If you don’t like vanilla extract, you can replace it with chocolate.

The last step of this recipe is the most satisfying one.

You’re supposed to dip the top of your freshly baked donuts into the glaze, then top with some sprinkles.

If you don’t have sprinkles on hand, you can use anything else you have at home. I sometimes use crushed nuts because they’re much healthier than sprinkles.

Remember that the glaze will need about 30 minutes to set, so let your donuts cool down on a wire rack. Once cooled, you can serve your donuts with a cup of coffee or tea.

If you’re searching for a vegan donut recipe that doesn’t take long or doesn’t require special cooking skills, consider the recipe above.

It’s seriously one of the best vegan donut recipes for a perfect breakfast, dessert, or snack. You can have these donuts in the morning with a cup of coffee. Or on the go. They’re a satisfying breakfast, trust me.

Although they’re made with common household ingredients and come together in 30 minutes, they still look and taste like commercial donuts. However, they’re healthier than traditional donuts because they’re vegan and baked.

Lastly, you can make your donuts sugar-free by using a natural sweetener instead of sugar and enjoy a healthy yet yummy dessert, breakfast, or snack without feeling guilty.

Can I Make These Donuts Without Sugar?

For instance, you can replace granulated sugar for granular swerve and icing sugar for confectioners swerve.

Swerve makes a great substitute for sugar because it’s just as sweet but consists of natural ingredients and has zero calories.

Substitute regular sugar with swerves in a 1:1 ratio.

Another great sugar substitute is monk fruit sweetener. You can replace granulated sugar with the classic white and icing sugar with powdered one in a 1:1 ratio.

Can I Use Vegan Butter Instead of Coconut Oil?

You can replace coconut oil with vegan butter; however, I suggest you don’t do that because coconut oil will give your donuts a slightly harder outer texture.

Simply put, your vegan donuts will resemble traditional donuts if you use coconut oil instead of butter. And the harder exterior with the cakey inside is what makes vegan donuts worth your time.

If you don’t have coconut oil on hand or don’t like coconut oil, you can use butter for vegans instead. Simply replace refined or unrefined coconut oil with vegan butter in a 1:1 ratio in your vegan recipes, including donut recipes.

How to Store Baked Vegan Donuts?

If you double or triple the recipe above, you will get tasty donuts for the whole week. You can store donuts in a sealable bag or airtight container at room temperature for 2-3 days, in the fridge for up to 7 days, or in your freezer for up to 3 months.

Regular donuts consist of animal-based products, while vegan donuts include plant-based ingredients only. Therefore, they’re still donuts; hence they’re real, but much healthier than regular donuts, especially if baked instead of fried.

Vegan donuts mimic the taste and texture of old-fashioned donuts, so you probably won’t notice the difference between vegan and regular donuts. The best part about vegan donuts is that they’re much healthier, especially baked ones.