Skip to content
The Donut Whole » How To Make Fasnacht Donuts If you’re looking for something filling, wholesome, and deeply traditional, you don’t need to look much further than the fasnacht donut. This age-old classic has been passed down by generations and can now be enjoyed by everyone. In the US, it’s a popular favourite throughout the Pennsylvania Dutch counties.

Traditionally, the fasnacht donut was made as a way of using up fats and starch-based products in the larder just before the fasting season of Lent. Although recipes vary, traditional fasnacht donuts often use potato as well as flour. This is one aspect that distinguishes them from other traditionally sweet breads.

Of course, you don’t have to wait for a religious festival in order to enjoy fasnacht donuts. Today, we’ll be exploring how you can go about making them yourself, as well as taking a closer look at this doughnut’s fascinating history.

A Brief History of the Fasnacht Donut 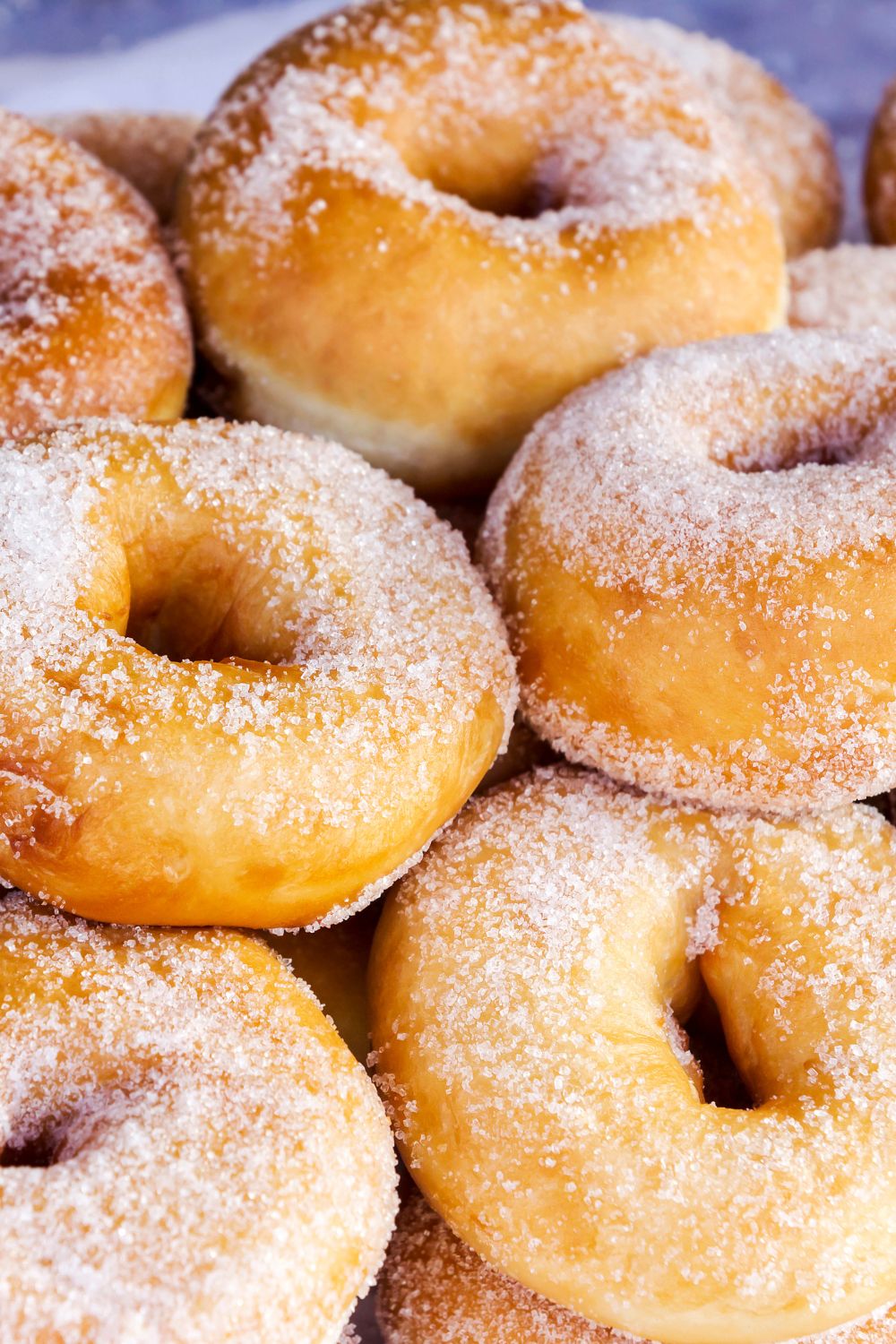 Fasnacht donuts appear to have their origins in the Germanic regions of Mediaeval Europe. ‘Fasnacht’, or ‘fastnacht’ as you will sometimes see it called, effectively translates to ‘fasting night’.

Traditionally, these doughnuts have been cooked as a way of using up plenty of food and fat before the fasting season of Lent. This means they are most frequently enjoyed on Shrove Tuesday, or Mardi Gras (Fat Tuesday) in French. A similar European-based tradition is pancake day, when pancakes are traditionally cooked and eaten the day before the fasting season starts!

This culinary and social tradition would have been brought over to America by settlers throughout the 17th and 18th centuries. German, Austrian and Dutch immigrants are all likely to have carried over their own versions of this festive treat. Nowadays, the tradition has been kept alive and well in the Dutch counties of Pennsylvania.

If you travel to this part of the USA, you won’t have to look far before shops or locals offer you a taste of fasnacht donuts! Interestingly, there are also comparable foods still being authentically prepared and enjoyed in European countries. Germany, Poland, Holland and Austria have all retained various versions of fasnacht donuts.

It’s fascinating how food and culture come to be shared and spread throughout the world. Fasnacht donuts are a great example of this. Now let’s take a look at how you can continue the tradition in your own home, preserving it for future generations!

As a traditional food for working people, you’ll be pleased to know the ingredients list doesn’t contain anything that you can’t grab hold of easily! In fact, you may already have everything you need to make these delicious treats waiting for you in your kitchen cupboard.

The recipe we’re about to follow makes 24 individual servings. This might sound like a lot, but given the recipe requires a bit of time and patience we recommend cooking a batch!

Let’s do a run down of the ingredients:

As with many doughnut recipes, your life will be made easier if you have a stand-mixer that can do the mixing and kneading for you. However, these are a traditional food, so you can certainly prepare them the traditional way. There’s nothing wrong with using your bare hands, it just takes a bit more effort!

Here we go then:

In a small saucepan, bring your milk to near boiling point, but don’t let it boil over. This is also known as ‘scalding’ the milk.

Gently melt your butter at this point as well (in a separate pan), but make sure to take it off the heat so it doesn’t burn. It’s also possible to gently melt butter using a microwave.

In a large mixing bowl, add the milk to the mashed potatoes and briefly mix.

Add ½ cup of sugar along with the melted, but slightly cooled, butter, and start mixing. Allow the mixture to cool down to around room temperature before continuing.

Dissolve your yeast along with ½ teaspoon of sugar in slightly warm water. Make sure it starts to froth, otherwise your yeast isn’t going to do the job properly!

Add your yeast mix to the potato mixture and stir until combined. Add in 2 cups of flour and continue mixing.

Cover this mixture with a towel and leave it at room temperature for about half an hour. It should start to rise!

You can then add a beaten egg to the mixture and combine.

Add the remaining 4 ½ cups of flour and stir it in using a large spoon.

Now time for some traditional baking! Turn the mixture onto a well-floured surface and knead for roughly 3 to 5 minutes. You can add a bit of extra flour if you find that the dough is too sticky to be handled properly.

Grease a large bowl and put the dough in it. Cover this with a thin towel and let it rise in a warm place for about 2 hours, or until the dough has at least doubled in size.

On a lightly floured surface, roll the risen dough out until it’s about ¾ inch thick. Now is the time to decide what sort of shape you want – some traditional fasnacht doughnuts are cut into square or rectangle shapes, but you can go with a circular shape as well if you like.

Use a doughnut to cut the dough into equal shapes of your preference!

Arrange your pieces on a tray lined with wax paper, placing them roughly 1 ½ to 2 inches apart, then cover the tray with a thin towel

Leave the tray (or trays) in a warm place for between 45 minutes and 1 hour. The dough pieces should double in size again

Now we can get frying – take care for this bit as this is where it can be easy to burn yourself if you’re not careful – make sure kids are kept at a safe distance!

Heat your oil, shortening or lard to 365 degrees Fahrenheit. We recommend using a high temperature thermometer here to gauge the heat accurately. Too cool and the doughnuts won’t cook and crisp up properly – too hot and you risk burning or searing them.

Deep fry each donut until both sides are golden brown. You’ll probably need to turn each one only once. If the oil starts turning a dark brown halfway through the batch, swap it out for fresh oil.

Once they’re cool enough to handle and eat, you’re ready to tuck in! What can I eat fasnacht donuts with? Fasnacht donuts can be enjoyed in a number of ways, but one tradition is to cut them lengthways like a bagel and spread them with something sweet, like a preserve, a jam, or syrup.

How are fasnachts traditionally eaten?

Fasnacht donuts sometimes appear in square or rectangular form. They can also be rolled in sugar, cinnamon, or other sweeteners – simply add a bit of your chosen sweetness to a bag and rattle your cooked donuts around in them to coat them. You can also create a caramel like glaze to coat them in. For something a bit different, why not try dipping them in chocolate sauce?

Where do fasnacht donuts come from?

Fasnacht donuts have their origins in the cooking of Western Europe, primarily the Germanic regions of Germany, Austria, and Holland. The tradition of eating these doughnuts the day before the start of Lent is one that appears to have been brought across to the United States by European settlers in the 17th and 18th centuries.

Today, fasnachts enjoy an enduring popularity in the Dutch counties of Pennsylvania, to the Eastern edge of the state.

We hope you enjoy this example of traditional family cooking that has been passed down the generations. Just think, when you tuck into an authentic fasnacht donut, you’re maintaining a history that goes back hundreds of years, as well as one that straddles the Atlantic!

The great thing about fasnacht donuts is their relative simplicity. The fact that you can make something so filling and wholesome out of the most basic of ingredients is nothing short of miraculous.

Bon appetit or, as the Germans would say, ‘guten appetit’