If you’re a fan of TLC, you might know New Jersey as the home of the Cake Boss. But it turns out you can buy a mean doughnut in that neighborhood as well. And some bakeries will even give you cake-flavored variants, yay! So, where can you find the best donuts in NJ? We’ll share some of our favorite spots and tell you a bit about the history of fried dough. Doughnuts are generally ring-shaped, but that’s not the only design they come in. You may find crullers, which or coiled, rope-like rings. Or dutchies, which are Canadian and square, pun intended. There’s also the beignet, the French square pastry that’s popular in New Orleans. You may spot rectangular doughnuts called long johns, typically topped with icing.

But when it comes to New Jersey, check out Glaze Donuts. They currently have three retail stores spread around the state. They focus on artisanal doughnuts, and in addition to their standard menu, they have two specialty flavors that switch every week. Artisanal options include French toast doughnuts, and you can order stacked signature flavors on weekends. Most of us spell donuts using the fewest letters possible, but in other parts of the world, you’re more likely to see doughnuts on a menu. For this article, we’ll interchange since they’re both correct and we’re all about inclusivity (unlike the #CroissantCommunity #SideEye). But did you know the word has older spellings? Like dow nut? It allegedly comes from a dowager.

Dowager seems like a French word, but it’s not – the French version has a lot more vowels! And you know what else sounds French? D’Ercole Donuts. It was started by Joe D’Ercole at his dad’s nursery. The latter ran for 75 years, but the doughnut section began in 2017. All his sweets are high-end, so if you’re in Northvale and you need an artisanal fix, give Joe a call. Let’s talk about those dow nuts. The name sounds rather rude today, but it was actually in homage to the baron’s mother-in-law. In aristocratic circles, a dowager is a widow that inherited her husband’s wealth, title, and status. She was often shuffled off to a small cottage on the property so her son and his family could live in the main castle. Or she could remarry.

Being a dowager doesn’t sound fun, but you can get the royal treatment at Shore Good Donuts. They have locations at Beach Haven and Ship Bottom, so when you want sunshine and sweet treats, head on over. They don’t have a website yet, but you can find them on Facebook or Instagram. And unlike some shops, Shore Good is quite generous with toppings. Back to dowagers and their nuts. As the story goes, there was a dude named Baron Thomas Dimsdale, and the dow nut recipe belonged to his wife. Since she’s described as a dowager baroness, he may have been her second husband. Or maybe she was his mom. Or his wife’s mom. Either way, her notebook had recipes and household tips, and dow nuts were in there.

Nuts and dows aside, we love a feel-good story. And when John Cabrera got a dishwashing job at Mills Bakery, he was only 14. He learned on the job, trained as a baker in college, and eventually came back to buy the store. The bakery is now close to 100 years old (though John is closer to 40!) and people routinely drive an hour each way to try his doughnuts. Worth. It. The Dimsdales wrote down their recipe about 1800, but we have earlier written records of dough-based dishes. A Nuremberg cookbook from 1485 has a similar recipe, except these doughnuts were stuffed and sugar-free. They called them fried dough cakes. Then the Dutch immigrants that founded New York – then known as New Amsterdam – introduced theirs.

Speaking of family businesses and recipes, L & M has been run by the same clan for half a century. You can pay by credit card, and they have a $10 minimum, though the usual doughnut fare is about $13 per dozen. They sell seasonal offerings like pumpkin doughnuts with orange icing for Halloween, and apple cider donuts, with or without caramel topping. The Dutch doughnuts that made their way to America were round, but they didn’t have a hole. They were called olykoek, which meant oil cake, or oily cake. And while that doesn’t sound palatable, remember that our aversion to fats is a relatively recent thing. In centuries past, those three square meals were hard to come by, so fatty food was the highest pleasure!

But while the Dutch and their (water) dyes are cool, let’s talk Japan by way of Jersey. In their homeland, mocha is highly ceremonial and steeped in tradition. Mochinut has Americanised this delicacy. The bakery fries 8 mochi rice cakes and strings them like an edible frosted pearl bracelet topped with frosting. They have multiple bakeries around NJ. (And the world!)

Back in England, Hertfordshire was a hub for doughnuts. Which makes sense – it rains almost every day over there and the weather is largely gloomy, so they need their fish and chips and fried cake just to keep warm! The dowager’s recipe was from Hertfordshire, and so was a 1750 DIY book on making cakes, nuts, and pincushions.  That’s like Ancient Pinterest!

Speaking of ancient things that still pop, let’s talk about jimmies, allegedly named for the guy who operated the first candy sprinkles machine. But … can you get them gluten-free? Yes, at Purple Glaze! Their namesake has purple jimmies on a blueberry glaze. But they also serve a cinnamon sugar doughnut with black raspberry filling. Don’t forget their Wake ‘n Bacon! Over in New York, an 1803 cookbook had an American doughnut recipe in its appendix, and an 1809 book mentioned them too. The latter was by Washington Irving and describes these oily cakes as sweetened balls of dough. They’re fried in lard and served by genuine Dutch families. So, yes, it would seem we got out doughnuts from the Dutch. Who’d ‘a thunk?!?

Americans love a family business. And if it deals in baked (or fried) goods, even better. And since we’re talking history, you’ve got to check out McMillan’s Bakery. They’ve been around since 1939 and their flagship is a cream doughnut so decadent you won’t want to wipe off the spills! At age 80, Arline Biemiller runs the bakery today – it was her parents that started it.

The history of the doughnut hole isn’t as clear, because the original oily cakes were solid. A spice trader named Hanson Gregory claims he invented the hole in 1847 because the middle would never cook properly, so he punched the hole to make it cook faster. He claims he was 16 at the time, and since his mom was famous for her spicy fried doughnuts, the story stuck.

But if you as New Jersey residents where to find the best cream doughnuts, you won’t find any holes in their story. They’ll mention McMillan’s, Deluxe Runnemede, and Kohler’s. The latter is an old bakery as well, opened in 1949. Kohler’s has been praised for ‘the best cream donuts on the planet!’ But it only operates from May to September, so mark your calendar!

Let’s continue Hanson’s anecdote. His mother’s fried dough was seasoned with nutmeg, lemon rind, and cinnamon, and she would often plug the hole with hazelnuts. It’s why she named her pastries doughnuts. Other origin stories admit the hole lets the dish cook quicker, but offer no clues to whose idea it was. By 1870, you could buy doughnut cutters anywhere.

Here’s another American doughnut joint that goes by the British spelling. It’s no biggie, just good to know in case you need to type it in a search bar. And they have doughnut ice cream sandwiches and sundaes. They make doughnuts by order, but they’re quick so you don’t have to order in advance. You can just walk in. Unless of course, you want four dozen doughnuts… We can’t seem to get away from oily cakes, though curiously, these may have been huge doughnut holes rather than hole-less doughnut rings. In some places, doughnut holes are sold as a separate snack, stuffed or dipped and sprinkled with sugar. Back then, at least among the Dutch and the Brits, a nut was a small cake or cookie, like a ginger nut or ginger snap.

We’ve talked Dutch doughnuts, now let’s talk Duck Donuts. This global franchise has stores all over America, including four in New Jersey. You can customize your doughnut online or at the store, picking from a selection of coating, toppings, and drizzles. Or pick something off the menu – they have a regular one and a seasonal one. Their Bacon in the Sun is to die for! Today, most Americans say donut, but the word has a curious backstory too. Apparently, a top New York company invented an automated doughnut machine and was worried their clients couldn’t pronounce it correctly and might order the wrong thing. So they ditched all those silent letters and went with donut instead. Sweet and simple, just like their snacks!

Rabble Rise Doughnuts is one of the few bakeries that spell their brand name the British way – American logos generally go with donut. That said, Rabble Rise is a rebrand of Mont Clair Bread Company, and their self-proclaimed doughnut addiction led them to shift their flagship from baked bread to fried dough. They offer brioche and vegan doughnut options. 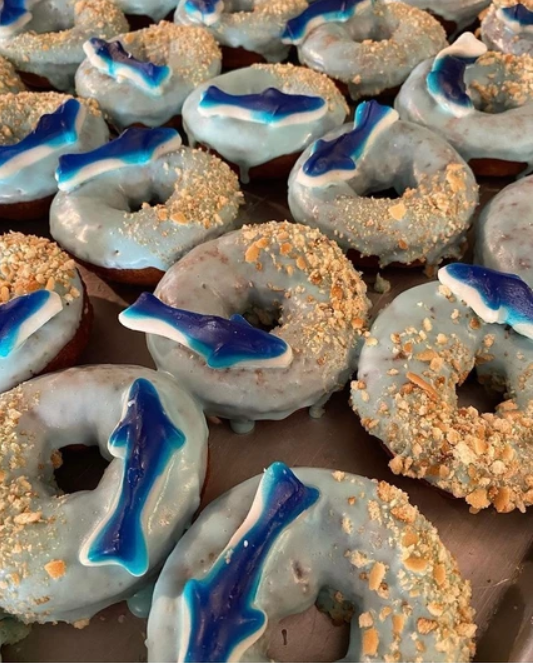 Fun fact: Dunkin’ Donuts – which now just goes by Dunkin’ – was initially named Open Kettle before it rebranded in 1950. Also, we celebrate National Donut Day on the first Friday of every June. And it’s not as flippant as it sounds! During WW II, Salvation Army volunteers went to France and served doughnuts and coffee to the boys. They were called Donut Dollies.

So in 1938, the Salvation Army declared this national holiday to honor those ladies. The two baking champs who first came up with this doughnut idea were Adjutant Helen Purviance and Ensign Margaret Sheldon. But since you can’t go to France and try their escargots or grenouilles (that’s snails and frogs to you), try a doughnut from Frog Hollow Bakery instead.

What’s your top doughnut spot in New Jersey? Tell us where to find it in the comments!