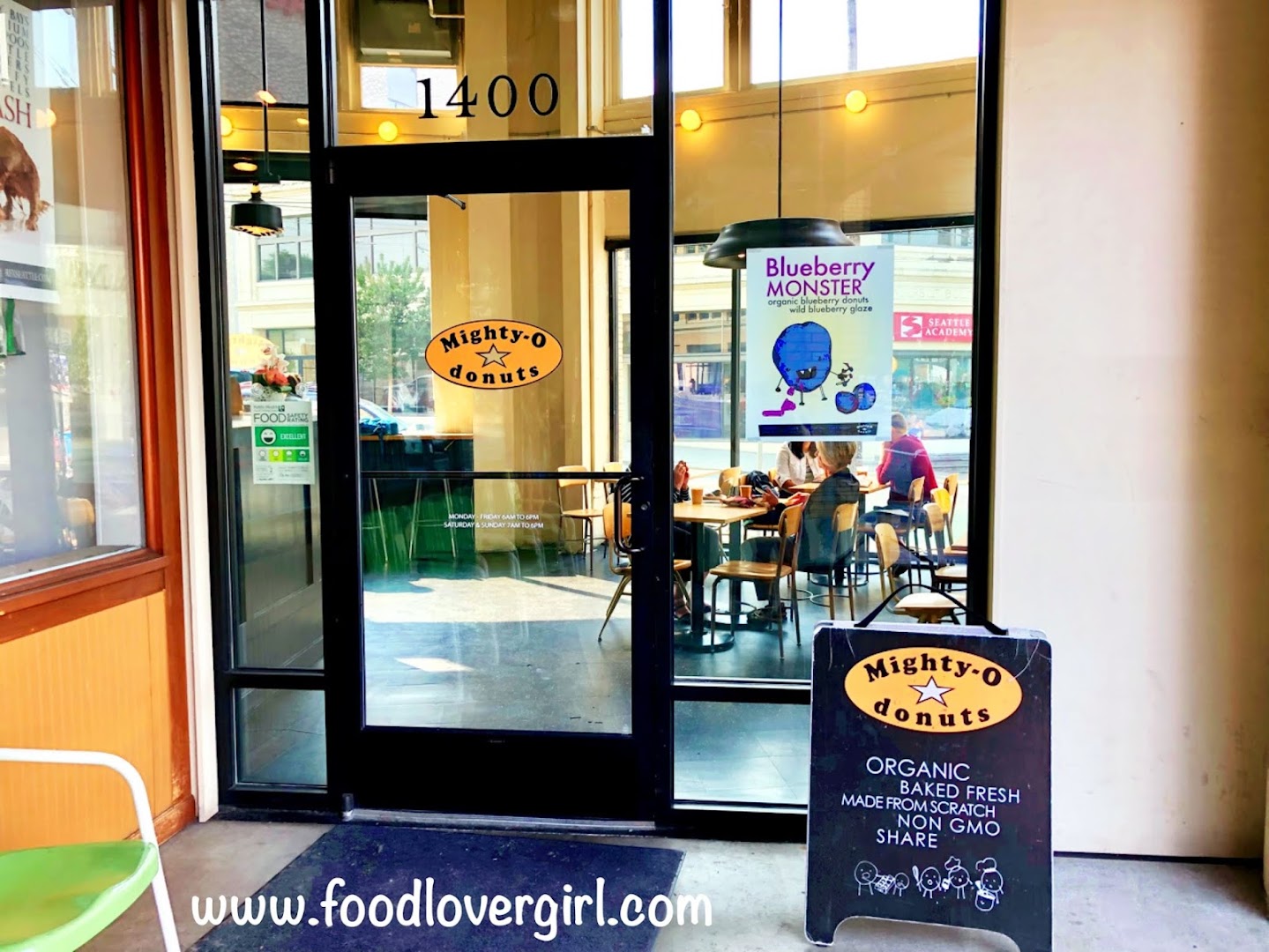 Hallelujah! These donuts are divine! All the donuts are vegan and they have loads of options to choose from. Our favorite was the raspberry, but the pumpkin custard was a close second. The staff was friendly and complimented the pretty leaf I was carrying around, which made me smile. Highly recommend!

Perfect place for some plant based/vegan donuts. They have mostly cake style donuts but have some regular ones. Very tasty and distinct chocolate glaze. They also have an array of different lemonade flavors that are all very tasty. 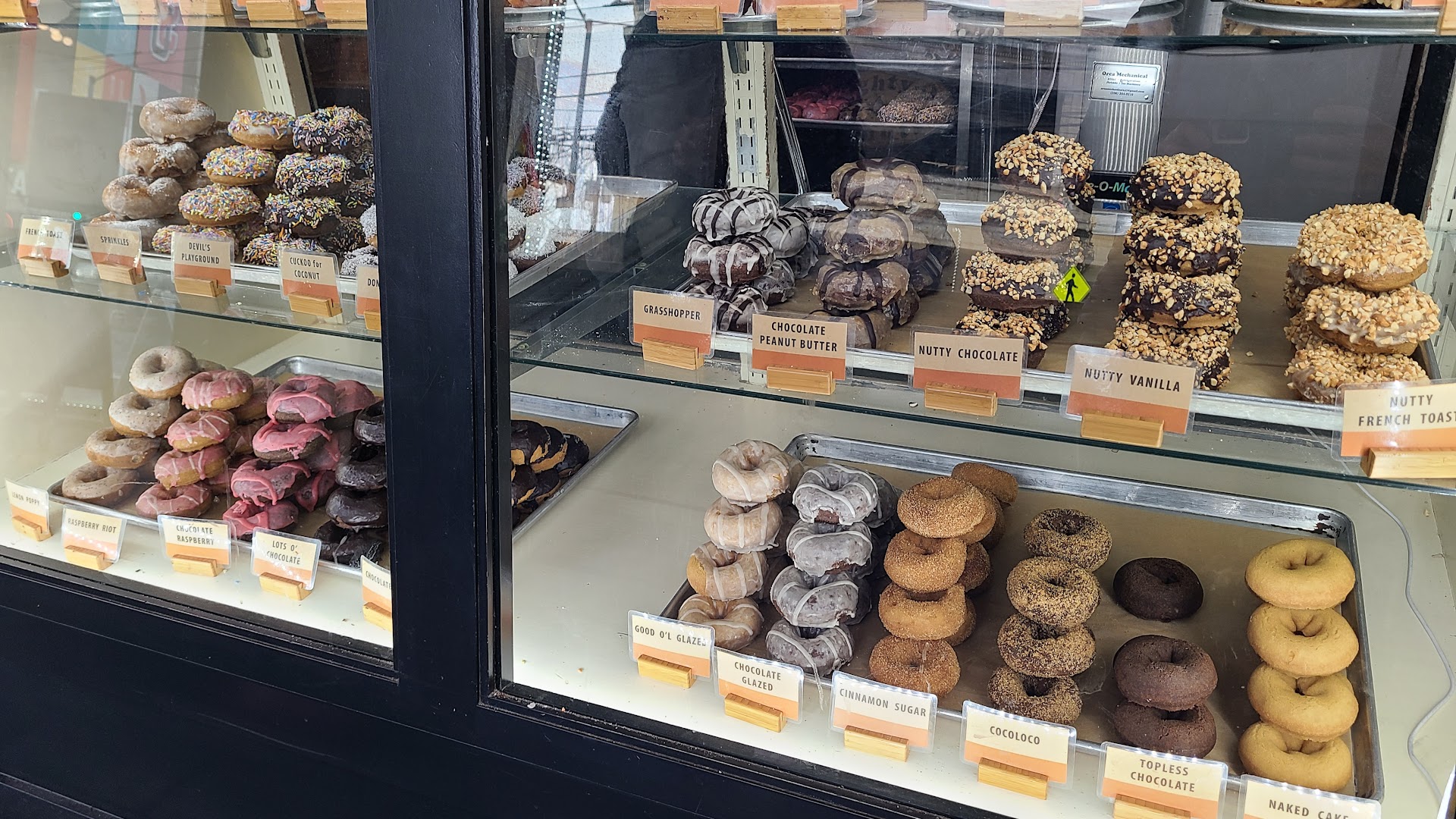 Absolutely delicious. The donut variety is impressive. We liked the good old glazed the best. We also had the coffee and while it’s very good it’s not on par with the donuts in my opinion. The only negative part is that locations are only available in Seattle, no east king county locations available so it was quite a drive for us. Not negative but something to be aware of, they are quite expensive. Almost 50 bucks for a dozen donuts and 2 cups of coffee.

My BF and I were walking our dog and stumbled upon Might-O Donuts, it’s in a great location for walking (unsure how parking is there but it looked like there might be some parking lots nearby).

There was a great selection of donuts flavors, and the prices are pretty standard for fancy donuts. We went a little late so they sold out of some of their flavors. They don’t have big bags to carry the donuts which seemed a bit odd since it looks like a heavy foot traffic area and it’s hard to carry a dozen donuts.

Disappointed. The donut flavors are very muted. It was upsetting not getting a flavor punch, even the coffee donut with a cold brew donut, coffee glaze, and espresso powder serious lacked that unmistakable coffee flavor. This was the same for the chocolate donut and French toast donut. The exception was the lemon poppyseed donut. The lemon glaze was puckeringly (my new word) good!
Note: If you order less than 1/2 dozen they stick all the donuts in the same bag. Also, they DO NOT have restrooms (for use) and there’s no table seating.
I will try it again, but not anytime soon. 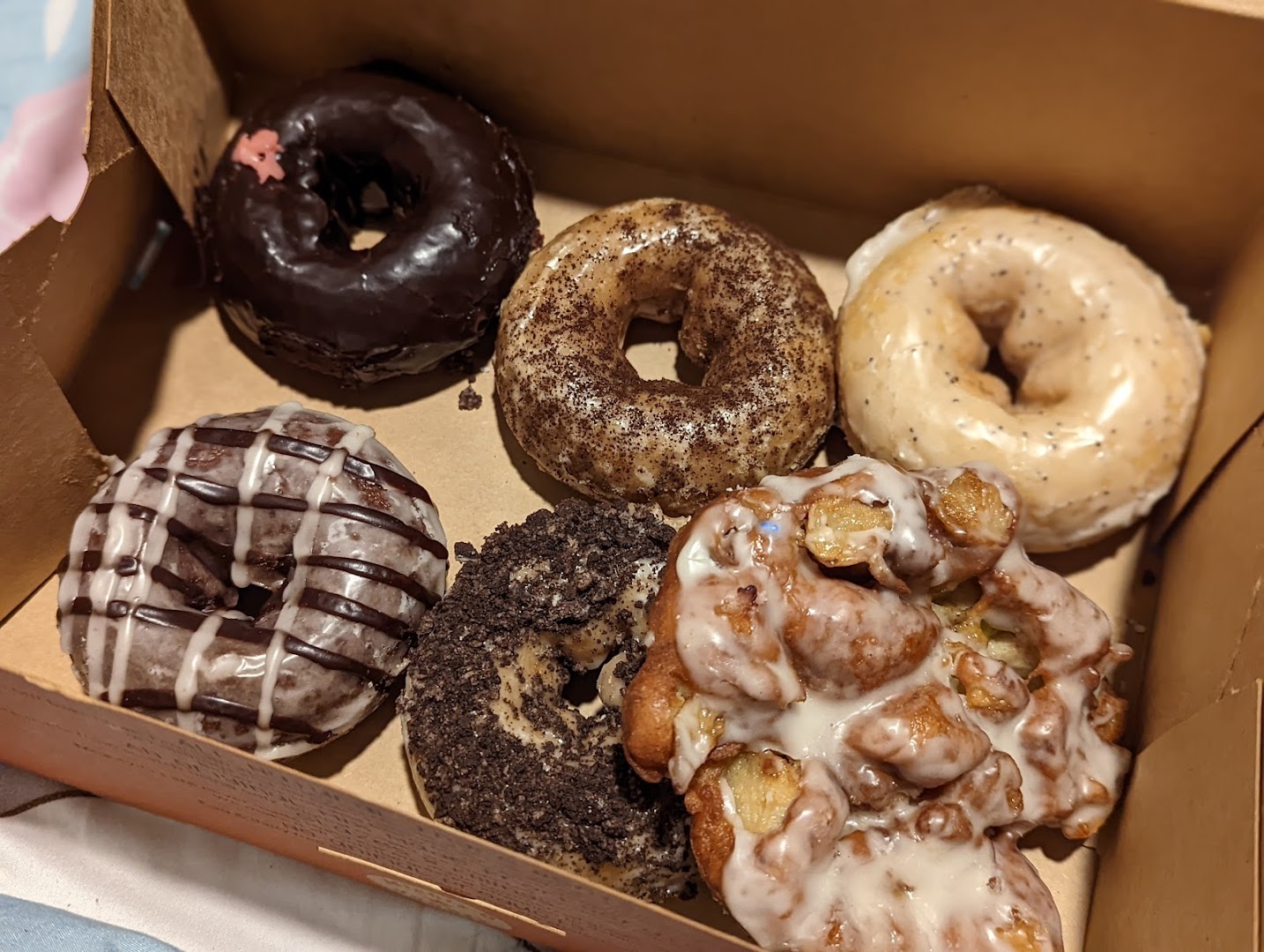 Their cake donuts are not memorable and their yeasted donuts (rings, apple fritter etc) are atrocious. The flavors are fine but they’re spongy in texture (early in the morning). I’ve had delicious, accidentally vegan donuts from way more affordable shops through the years. They also don’t make clear on their signage which donuts belong to which price tier (never would’ve guessed I’d be paying $4.50 for an objectively not-good yeasted ring).

The donuts are surprisingly delicious(a 5-star donut) in that they are vegan but taste like regular donuts; However, 2 donuts (French Toast & Cream Filled) and $1 tip cost me $9.25 which to me was shockingly expensive. Interesting to note that there are no price labels anywhere. 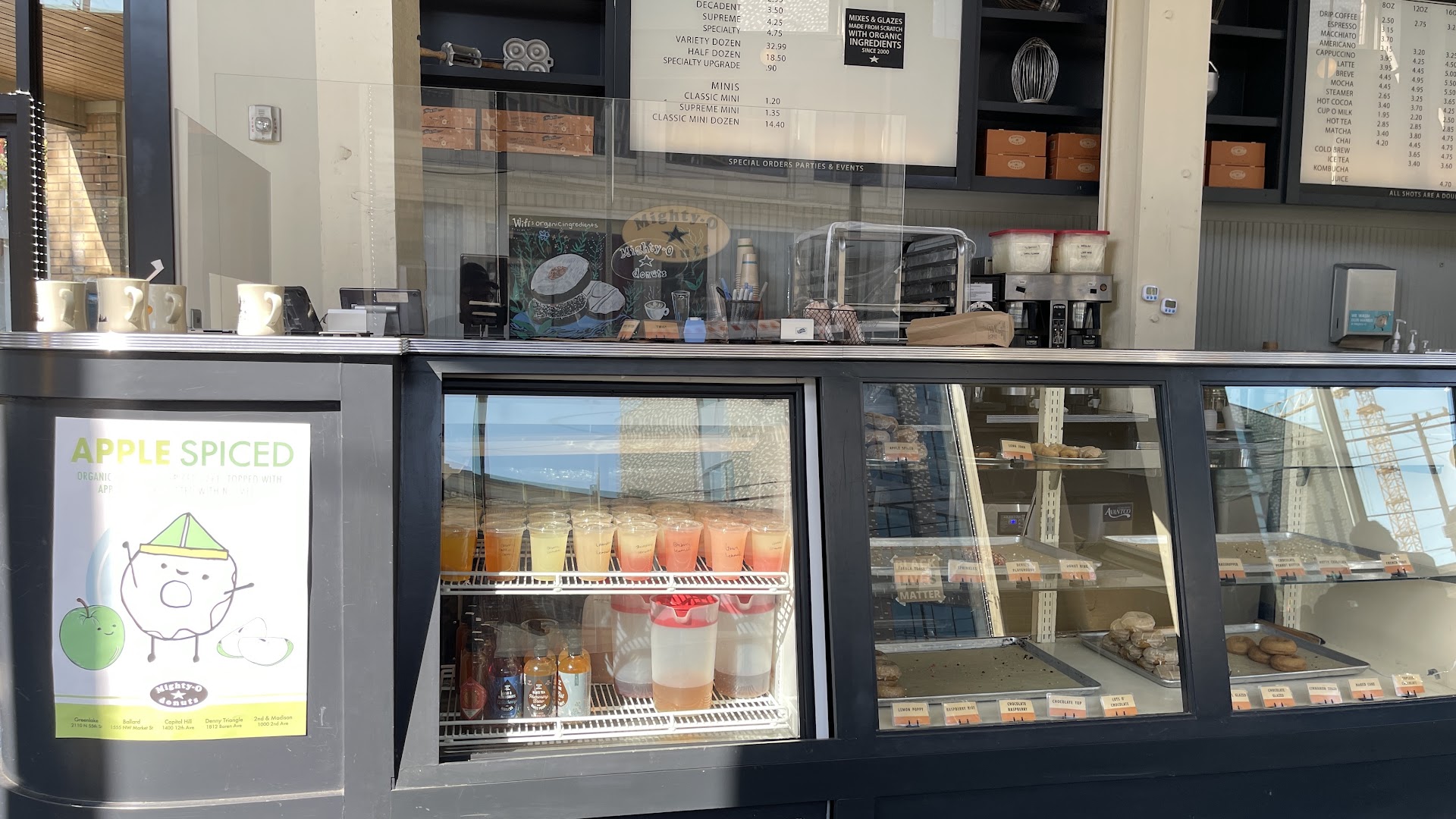 Amazing… Everything is vegan too! Why they don’t blast that fact everywhere is beyond me. Had we known it was all Vegan, we would have stumbled upon it much sooner!

One thing I found while visiting Seattle was that they had countless option for places to get sweet delights. We wanted to visit them all, but we didn’t have the time… One of the places that we got to visit was Mighty-O Donuts. Until we got there, I didn’t know that it was just one of handful of locations.

This spot was located on the corner lot, and with lots of large windows, the inside was nice and bright. They had a few table seating at the front, and then counter seating all the way to the back.

They had all the goodies at the counter to the left. They also had their cold beverage offerings right next to the donuts. They had pretty good selection of donut flavors, it was not going to be easy choosing which one to try…

We got a few mini-donuts and 1 regular donut so that we can taste several flavors. Their donuts are made with no chemicals, no GMOs, and no animal products. Yes, they are organic vegan donuts! We tried Cinnamon Sugar, Blueberry Monster, Glazed Baby-O’s, and Chocolate Raspberry. They were tasty with rich flavor, and comforting. And yes, much healthier than regular donuts, as they are organic and vegan. It makes you smile to have a little sweet delight that taste so good!