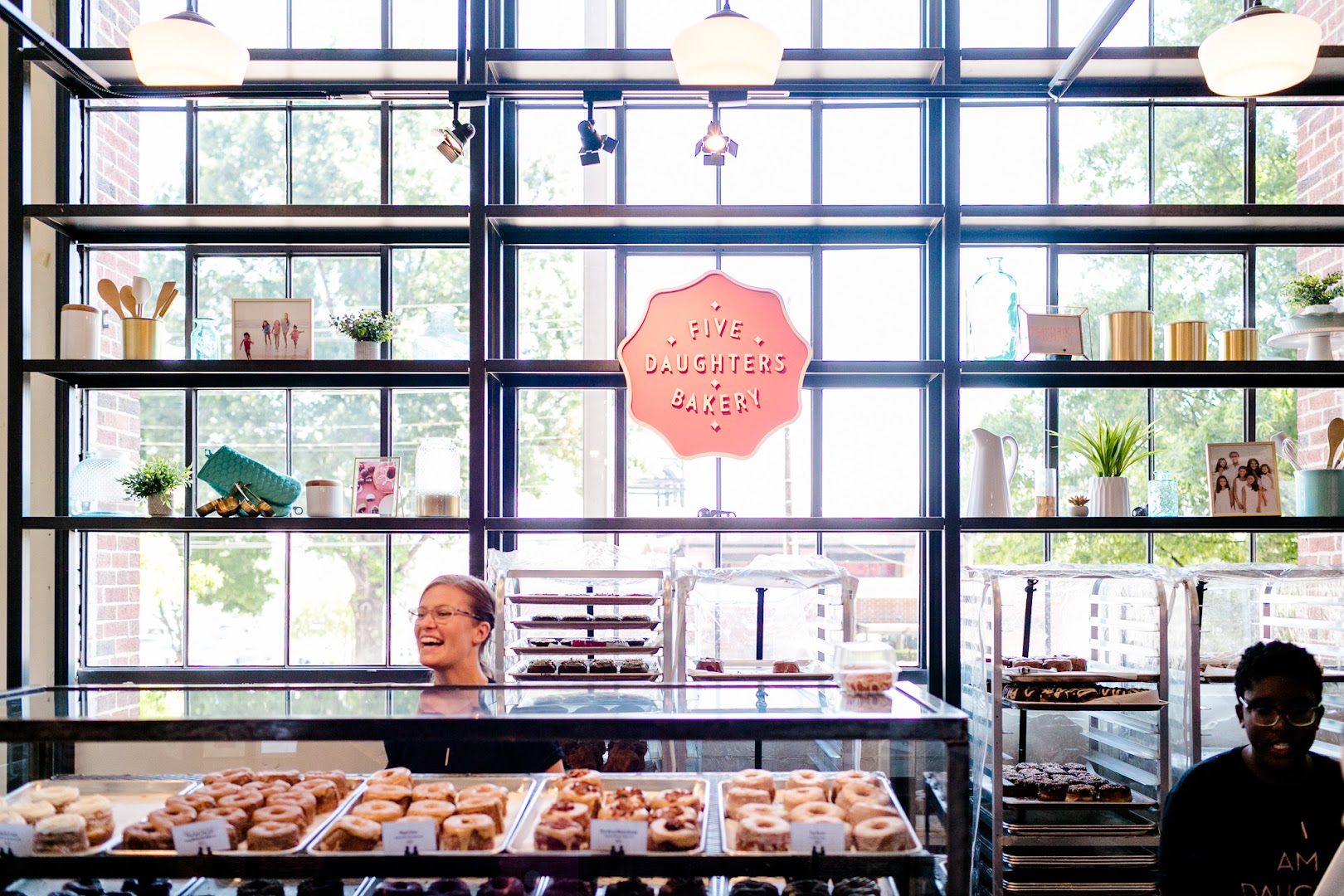 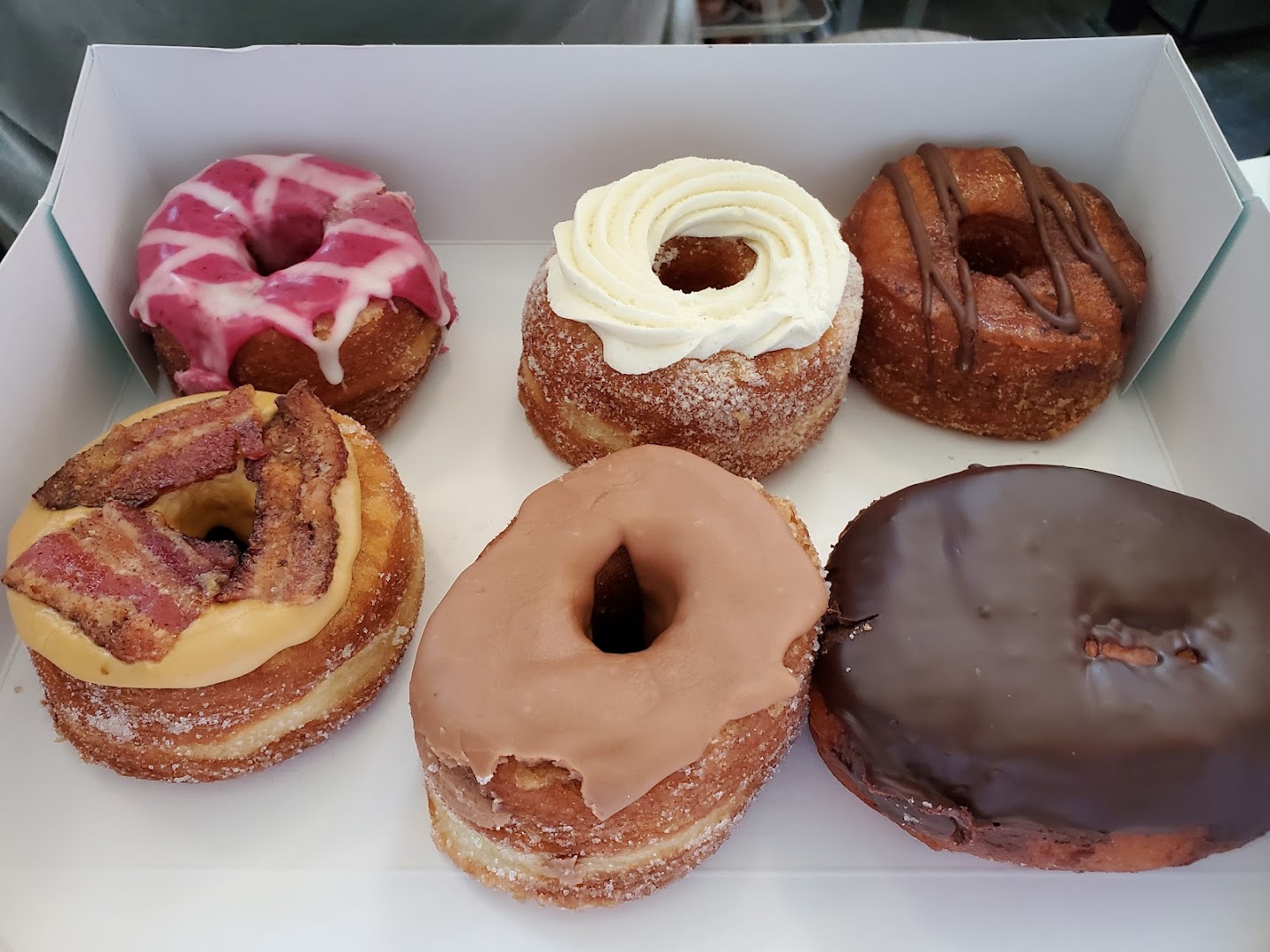 Incredible donuts. Unique flavors and good ingredients. I had the lemon cream filled donut and I have never had one so tasty, with a unique texture and flavor. Superb! Very pricey, though, but considering where it’s located, that’s expected. Will be back…

4.5 | I say this as a non-donut loving person, these donuts are what I’ve learned is considered a “cronut” croissant-like donuts that are flight and flaky. this “100 layer” experience is quite satisfying. I was there early in the am too and the soft freshness of these pastries are delectable. even me, a person who doesn’t really crave a donut like many, can appreciate the lightness and excellence of it. it’s also black-owned I believe, so love that. the thing that I typically don’t love about a donut [the density and it being overly sweet], is not the case here. I highly recommend you try it if you’re at Ponce.

I was at PCM and came across this gem of a bakery. Now, maybe because of the time of day, they had very select options. However, I’m pretty much a basic donuts kind of gal: old-fashioned, cake, glazed donuts, etc. So, I was okay with choosing ” The Plainest” donut, which was not plain at all. The texture of their donuts reminds me of a croissnut (a hybrid of a croissant/donut). It was super thick, sweet, but not overly sweet, and the glaze was perfect! I will definitely be back to try more flavors. 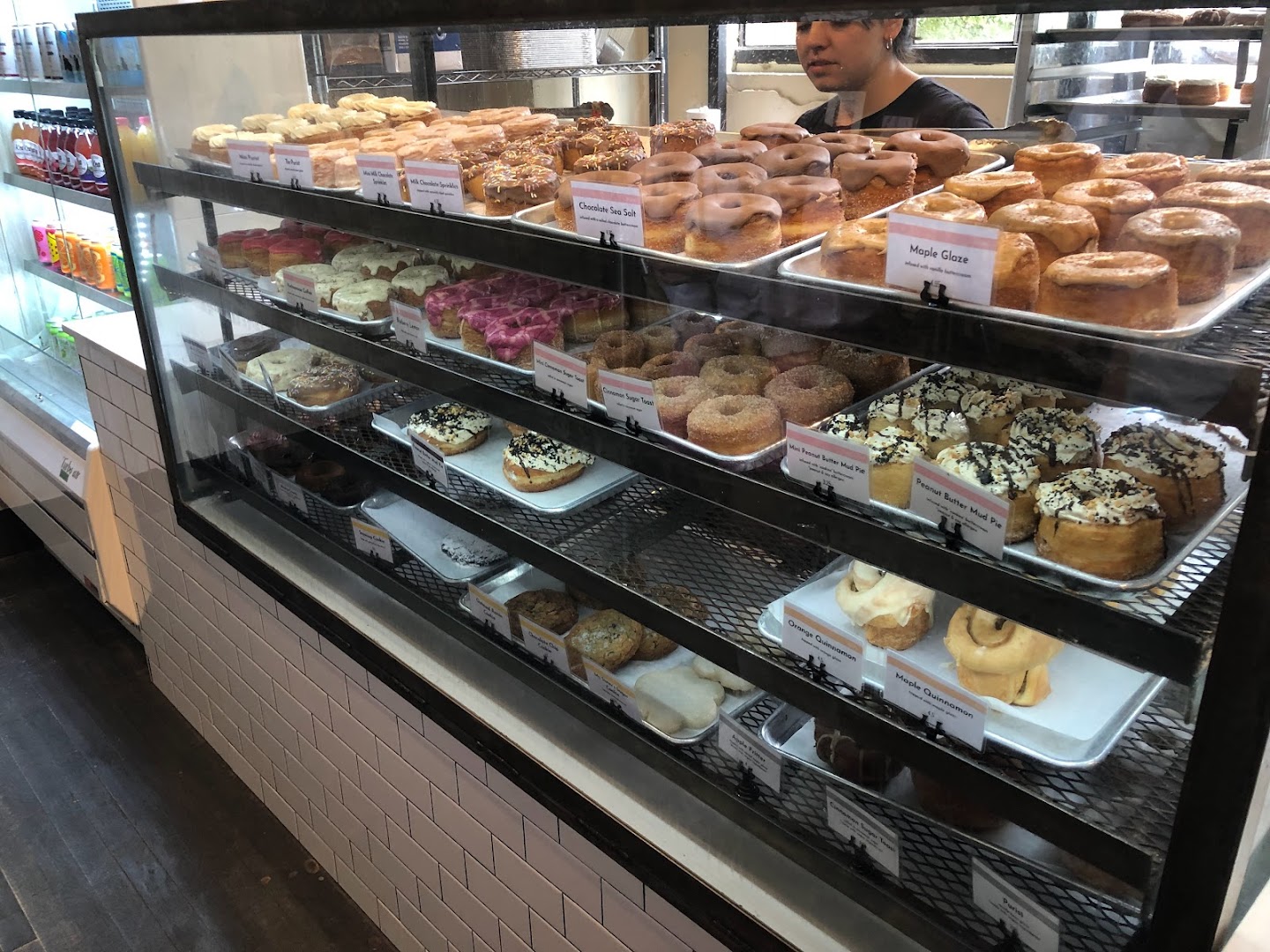 I was so excited to try this place during our trip to Atlanta… But I was so disappointed. The gentleman was super nice behind the counter and recommended a few donut flavors. My friend really enjoyed her vanilla one (not pictured) but mine were just “okay”. The donuts are almost croissant texture, but on a stale level.. infused with cream that was watery. We can’t win them all… But I’d give this place a second shot if I visit again.

I am a lover of donuts and consider myself somewhat of an expert. I’ve had voodoo and Hertz donut, which are great. The donuts I recently had from five daughters were absolutely exquisite. Great flavors, but the differences in the dough. It’s like the texture of a raised donut mixed with the rich creaminess of a cake donut. Whatever they are doing, it works! These are next level donuts.

Well that’s it. I’ve found it. I’ve tried so many donut places and this is now the top place that I will recommend. A few things

1. Donuts themselves were light and airy which made having more than one super easy.

2. Flavor combos were on point. Usually for these types of places, there are a few standouts but all of them were so good.

3. I see some reviews about prices. Don’t get me wrong they are high, but they are about average for artisan style donuts and honestly they are the most worth it for that price that I’ve had in my experiences.

Parking can be a hassle so I’d suggest making a trip to the market for other things as well but this will be a stop if I’m in the area, even if I’m not hungry haha!

Pictured below is the purist, the maple glazed, the blueberry lemon and the Vietnamese coffee ❤️❤️ 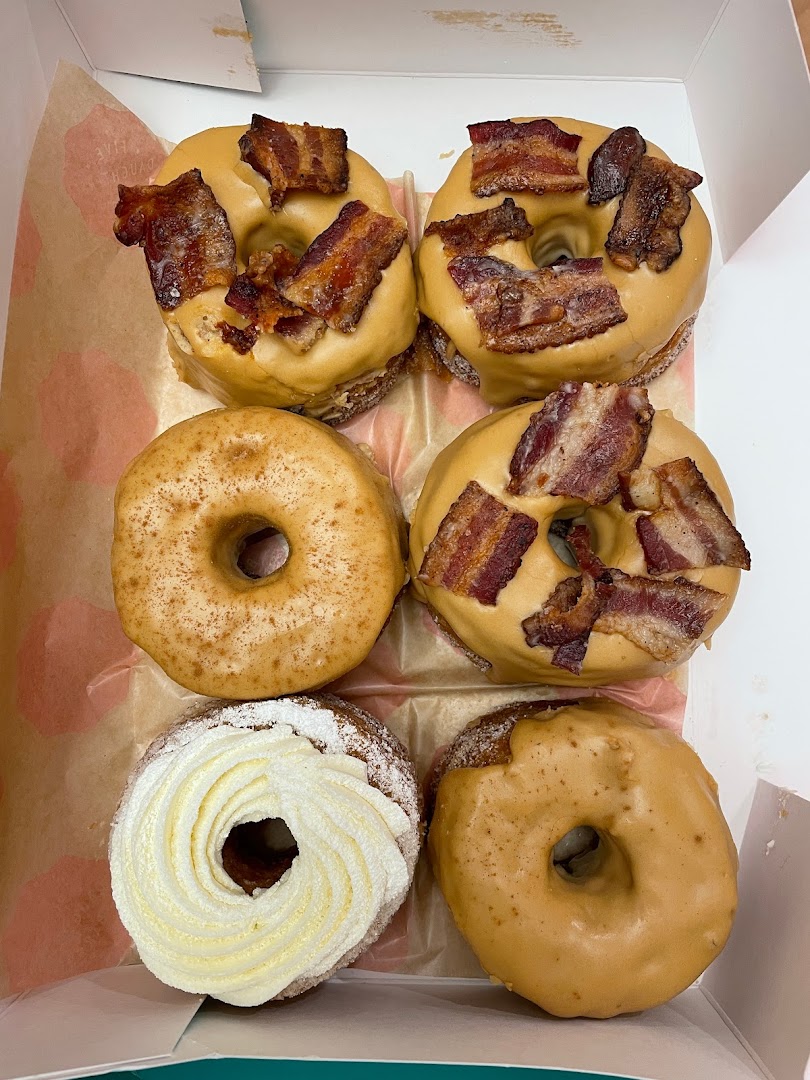 My doughnut was a gift and I had not heard of them so I didn’t know what to expect. The croissant texture was a pleasant surprise. Since I didn’t get any filling on my first bite, the lemon curd on the second bite was a pleasant surprise too. I don’t typically like filled doughnuts but this was delicious and the ratio and texture won me over! They are a little pricey for a doughnut but they make a nice treat.

Absolutely delicious pastries in a somewhat hard to find location (hint, use the Ponce City Market website to load directions because this is in the first floor food hall area but tucked behind some other spots). A really good assortment of pastries that you can tell are made with a lot of care. Homemade marshmallows on top of the s’mores were a delicious touch! 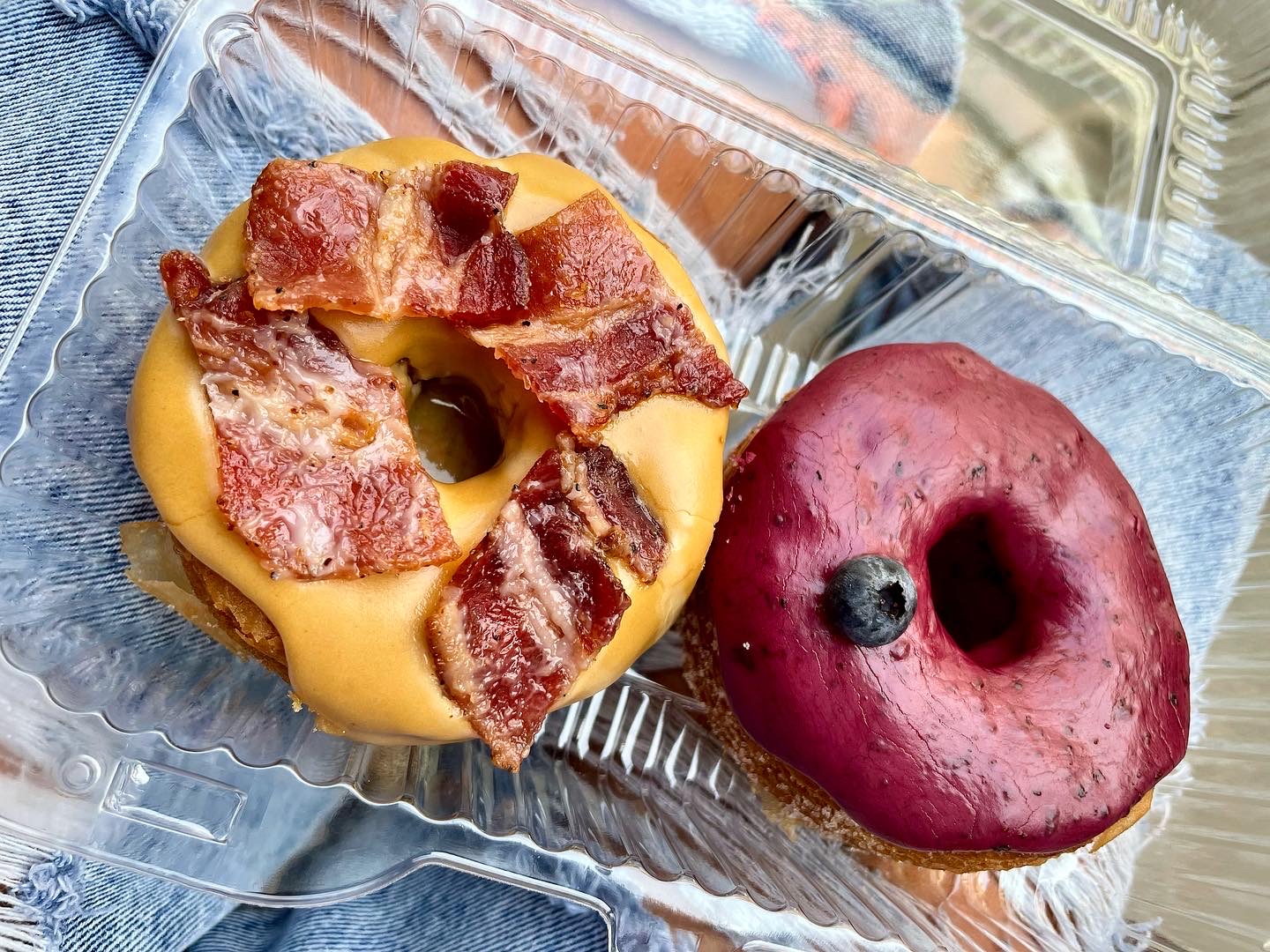 The best Doughnuts I’ve had thus far !! We got all their monthly flavors plan on going every month this particular location gave me a little grief as it’s behind other shops and not on the main walkway but it’s definitely worth the find
First off that maple bacon Doughnut great
The actual consistency of three Doughnuts like the base you can’t go wrong the toppings or flavors are just basically your flavor profile
But the doughnut in it self was consistently delicious staff was friendly love it definitely try did a review on September flavors on my YouTube (Just Kesha ) and my tik tok Juicydimples87 can’t wait to see what next month’s flavors are !!

Staff was super helpful! The paleo donuts are so good!! We enjoyed these donuts with a coffee from another nearby vendor. My favorite was the sea salt chocolate paleo flavor.